If you want to play Warcraft then you need to know

If you want to play Warcraft then you need to know

Date of Origin: The first version of Warcraft: Orcs & Humans was released in 1994 for computers running Microsoft DOS
. Released in 1996, it revolutionized
the gaming industry at the same time.

Although Warcraft: Orcs and Humans was not the first multiplayer strategy game, it made Blizzard think that wider multiplayer games were needed for the future, and this was the first part of making Warcraft World.

In 2004, Blizzard Entertainment launched the online multiplayer role-playing game World of Warcraft, which was welcomed by over 12 million subscribers worldwide in 2012.

In 2006, he released the World of Warcraft supplemental package, The Burning Crusades.

In 2008, it released another add-on pack called World of Warcraft: King Leach Wrath.

In 2010, another supplement to Warcraft World: Cataclysm was released.

In 2012, it released another supplement to World of Warcraft: Pandaria Months.

In December 2014, World of Warcraft: The Warlords of Drinor was released.

This game is still captivating gamers around the world, and it seems that the versions and updates of this game are not complete

You can get help from this link to download the game . 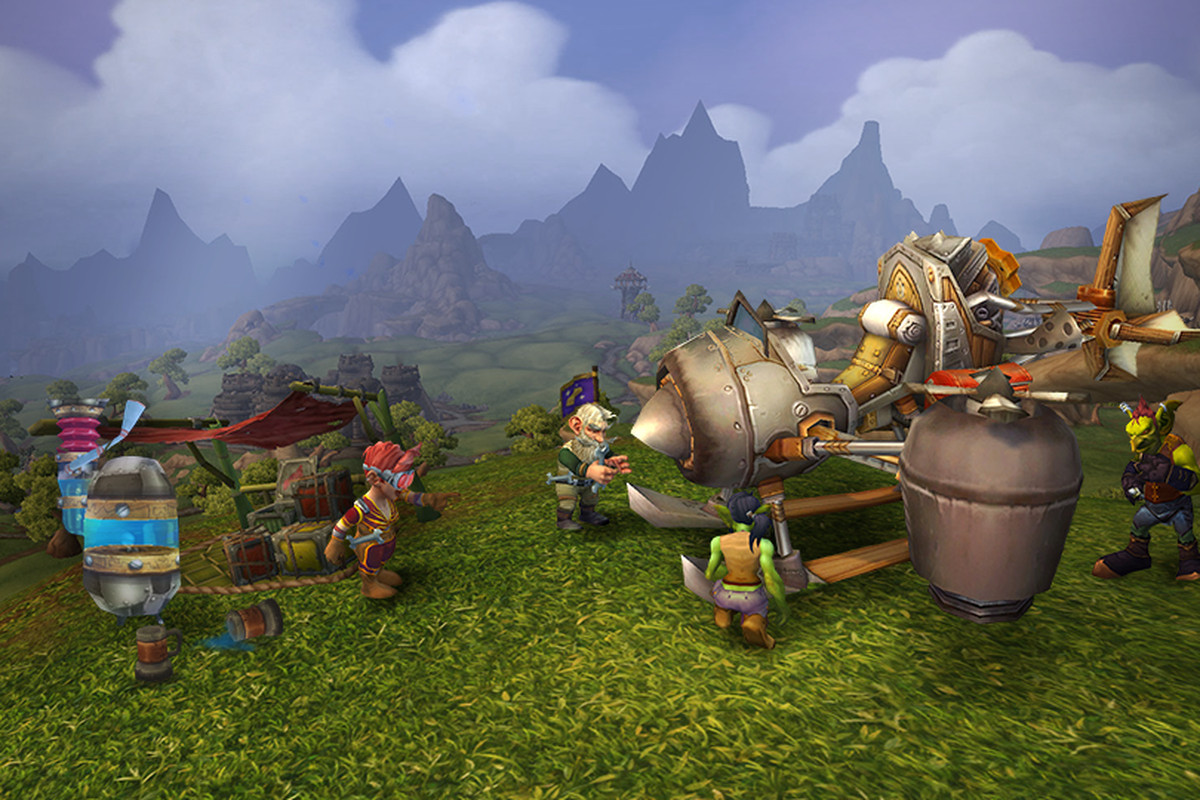 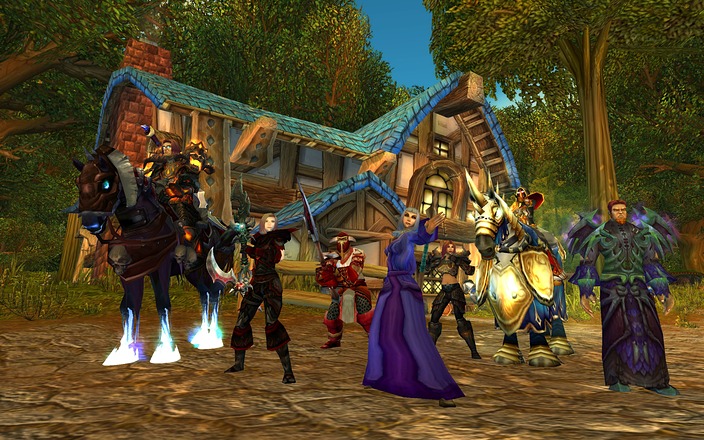 The style of the game is third-person role-playing and the game is designed online, ie there is no single player. You do not need a game net to play and having 128 KB of internet is enough to play on Iranian servers, but on foreign servers you need more speed. They are playing notes.

The size of the game is between 20 to 25 gigs, depending on the version of the game, to enter the game you need an account that is created on the server

You do not need to pay for playing on free private servers and you can log in to the server and play by creating a free account.

What is the difference? There are many differences: the services provided by the main server are not provided by any of the free private servers in the world, and also the main server is completely fixed and the free servers have many problems, but this game is so attractive that you will forget about the problems in the game. The players of this game are playing on free servers

The improvements they make in the game are not lost when you leave the game and are stored in your account.

How do I know what version of the game? Enter the game that is intense, is written at the bottom left and is also written on the game server site

What is addons? Adons do their job is to make things easier in the game and there are different types, for example: Doing quests faster You can use addons quest helper

After entering the game of World F Warcraft:

You have to get Level: that is, from LeVeL 1 to the last level in the patch, which is very simple at first and then becomes more difficult.

In the game, there are a series of quests that you can do to get the gold or tools good by doing them.

You have to learn new powers: for every 2 level s you take, you can learn a series of new powers.

You have to buy clothes (armor) and weapons: in the game you need weapons and armor to fight.

You have to collect gold: to learn new powers – you have to give gold to new clothes and tools of war

You have to choose a job (blacksmith – miner – tailor, etc.): Through this job you will earn gold

You have to collect pride: In the game, there are two groups that are enemies with each other, and if you kill one of the members of the opposite group, you will collect pride, with which you can buy “PVP” items.

The most important and beautiful part of BattleGrounds and Instance of World F Warcraft:

BattleGround is a place like a battlefield where you and your teammates fight enemy groups and gain honor.

Instance is also where you and your friends and teammates go and get gold and items by killing the bosses.

What is a buff? Buffs help players do their job better. Of course, we have two types of buffs, a good buff that is hit by players of each ethnicity, such as ally. It hits the players. Now how the weavers help the players, so that by increasing the stats value of the players increases the efficiency of the player.

Instance: Instance is a separate and closed environment that works privately for the groups that enter it. It is called Instance Dungeon and according to the standards of Warcraft world, it is divided into two types: Dungeon and Raid. The main difference between the two is the number of players, the size of the environment and the difficulty.

Dungeons are generally referred to as five-person extensions, and Raid is a 10-person, 25-person, or, like some older, 40- and 20-person extensions. Raids often have larger environments, and the quality of the items they drop from the boss is better.

Faction: Faction, which literally means group or party, in Warcraft refers to groups that agree on an ideology or race, such as the Alliance and the Horde, which are playable races. There are also micro-modes in the game, such as Earthen Ring or Guardians of Hy’Jal, which are neutral and can be contacted by players in the two main modes.

Experience point: It can be said that XP is a point that is obtained as a reward for completing missions, killing enemies and gaining skills in professions, and by earning a certain amount of it, the characters created by the players are Leveled up.

Level: A level is a mechanism by which the game categorizes enemies, bosses, creatures, items, and players, determines their level of power and effectiveness in combat, and allows them to use different levels of equipment. Level up occurs when players earn a certain amount of XP by completing a mission or killing creatures. Level up allows players to use better equipment and gain more power and skills.

PvP: or Player vs. Player, player against player, means when a player is fighting with another player / players.

PvE: or Player vs. Environment or player against environment, generally refers to playing in the environment with or without other players and destroying mobs and NPCs.

Mob: Uncontrollable and controversial characters in the game that have XP or Loot.

NPC: To non-playable characters in the environment, and sometimes players have the ability to communicate such as receiving a mission or receiving rewards.

Boss: Enemies that have a lot of power and are often fought in groups.

AoE: or Area of ​​Effect is a type of attack that affects the environment and has the ability to damage multiple players or mobs.

CC: or Crowd Control is a tactic that temporarily takes the enemy out of the battlefield and is broken with the first attack or after a certain time and that enemy returns to the fight.

Wipe: It can also be called reaping, and it is when the group (Party or Raid) is completely defeated and all the players die.

Sta or Stam stands for Stamina

Tank A person who has the task of defending against Boss, which can be one of the DK-Warrior-Paladin classes and sometimes Druid. Usually tanks have the highest HP.

BL stands for blood lust, one of the shaman spells that increases the power and speed of the spells

dot stands for damage over time. Some spells stay on the target for a while when they hit the target, and do damage to the target at least once.

Resto stands for Restoration One of the characteristics of the shaman class, which is the healer

Aggro stands for aggression, which means that the boss pays attention to the player, when Aggro is in the tank, the boss only hits the tank.

AoE stands for area of ​​effect.

Wipe When the boss kills all the players, they say we became wipe, or if saying Wipe it means let go

Buff stands for beneficial spell: Spells that are fired at teammates that increase some of their abilities.

Debuff stands for reductionary spell: A spell that a boss or mob hits you and you have that spell on you for a few minutes, which reduces some of your abilities

ML stands for Master loot: When this mode is active, only someone with a master looter can remove items inside the body.

FFA stands for Free for all In this case, everyone can loot the body

OT stands for Off Tank

Nuke means to do damage without considering Threat and Aggro

What is Game Master? GM

You will definitely face problems on the server and you need help to solve them. You need more access to your power in the game. At this time, the game master or GM will help you, which you can communicate with by sending a ticket in the game. Be.

Gamemaster plays an important role in managing the game, and server administrators who value their game server use literate and experienced gamemasters.